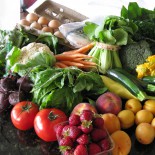 Quinoa (pronounced keen·wä), is showing up in a lot of recipes lately, so I had to find out more about this grain.  I found out that it is a nearly complete protein and one of the healthiest whole grains around. There are a lot of healthy things that I usually stay away from….lentils, barley, chick peas, fava beans…so at first I wasn’t sure I wanted to try Quinoa. But I saw a variation of this recipe in Cooking Light and thought I would try to be healthy and at least give it a chance. I was pleasantly surprised!

As with many of the recipes I make, I didn’t really like the original as written. This recipe was heavy on the Quinoa and very light on the vegetables. So I made adjustments, tried it again, and I think this version is much improved. I served it to a good friend of mine who was also skeptical about this grain and had never had it before. I told her it was a perfect time to explore something new. She was a good sport and tried it, liked it, and even had two servings. (I find that most people are very polite and are not going to say they don’t like something when you serve it to them…but they won’t go back for seconds unless they really like it!)

Another ingredient of the recipe that you may not use much is parsnips. For those of you who have never used them in a recipe, they look a bit like light yellow carrots.  They are mild, but they really add to this recipe, so don’t leave them out.

Note: You can make this a day ahead. Bring it to room temperature and add 2 tablespoons of olive oil if it is dry.

If you want to try a small amount of this recipe first, cut all the ingredients in half.  It makes a lot.

This entry was posted on July 29, 2015 by Dugan's Kitchen in Dinner, Side Dish, Uncategorized and tagged Healthy, Quinoa, Side Dish.

Look for Recipes by Meal